When the School of Engineering in the University of Edinburgh was looking to expand their power lab capabilities, they needed to source a power system that generated results.

Legislative and social pressures are finally seeing the tide turn for renewables, with the majority of the world’s countries committing to strict emissions targets. Advances in low-carbon technologies are seen as a key pillar to achieving net-zero CO2 emissions by the second half of the century, by making clean energy generation cheap and efficient.

The Institute for Energy Systems within the School of Engineering is at the forefront of this energy revolution. Within the Institute’s Offshore Renewable Energy and Electrical Power Conversion themes there is a strong focus on the design and development of next generation power-electronic converters and electrical machines for renewable energy. Researchers within the Institute’s Power Systems theme also investigate how renewable resources interact with power system stability, protection, and quality. 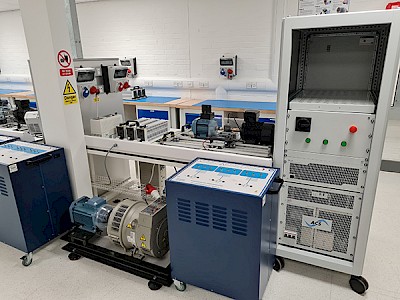 Experiments into devices and systems of all sizes within these themes are conducted by the institute: from full power-electronic converter design and power-systems integration studies, to performance testing of novel light-weight modular generators and motor systems for renewable applications.

ETPS supplied an EAC-ACS-4Q four quadrant module to the School of Engineering. Each of the power-system’s three phases are individually programmable to sink or source either AC or DC power. When operating as a sink any excess energy is recycled back to the grid.

Asked on the importance of the power system, Lecturer Dr Paul Judge explained “the EAC-ACS-4Q is a key piece of hardware. It will enable us to bring together experimental work in research areas such as power-electronics, electrical machines and smart grids in one lab. It will also enable us to expand our research into new areas such as automotive and aerospace.”

The EAC-ACs-4Q is a key piece of hardware. It will enable us to bring together experimental work in research areas such as power-electronics, electrical machines and smart grids. 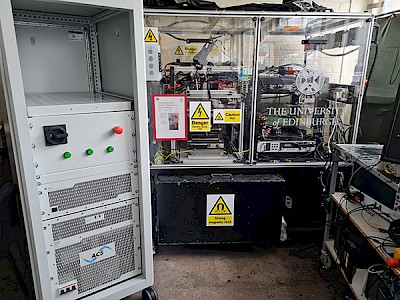 Dr Paul Judge added “One of the key reasons we decided to purchase the EAC-ACS-4Q unit is the sheer amount of research activities that its capabilities underpin. Due to the varied nature of our work, we needed a flexible system capable of simulating a wide variety of different electrical systems.”

“When researching smart-grids the ability to generate unbalanced fault scenarios and emulate high order harmonics on the power-system is critical. For example, this allows us to research power-converter controller interactions in power-systems with high penetration of renewables.”

“For electrical machines research, we need to operate down to very low frequencies when testing large renewable generators. The same system also needs to operate at high frequencies for aerospace applications, which typically operate between 400Hz and 1000Hz.”

“Additionally, the unit’s ability to act as a bidirectional AC and DC source is invaluable for general power electronics work. As we can test the input or output of virtually any AC or DC converter within the EAC-ACS-4Q’s power and voltage ranges.”

The University of Edinburgh has long and historic roots. Opened in 1583, it is the sixth oldest university in the English speaking world. The University is globally recognised for research, development and innovation. They are consistently ranked as one of the top 50 universities in the world.

The Institute for Energy Systems (IES) is one of seven multi-disciplinary research institutes within the University’s School of Engineering. There are seven integrated research areas within the IES, involving 26 academic staff, 28 research staff and around 70 postgraduate students.

One of the key reasons we decided to purchase the EAC-ACS-4Q unit is the sheer amount of research activities that its capabilities underpin.

Each of the EAC-ACS-4Q’s three phases are individually programmable for voltage, frequency, phase angles and superimposed harmonics. Below are example configurations using a 30kVA module. Larger systems are possible from 50kVA to 1MVA. Full details are available on the technical datasheet.

(Total current to neutral limited to ≤20A) 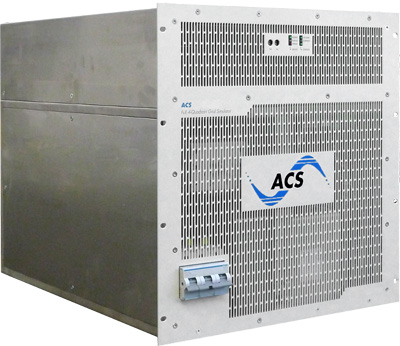 The EAC-ACS-4Q is a modular grid emulator with full 4 quadrant operation. Each unit has the ability to sink and source both AC and DC power.

The EAC-ACS-4Q is a modular grid emulator with full 4 quadrant operation. Each unit has the ability to sink and source both AC and DC power. All three of the unit's phases are individually programmable for voltage, frequency, phase angles and superimposed harmonics.

Electrical devices in the energy and renewables sector must be tested under conditions that they are likely to experience. Read more