The confusing jargon of technical websites can often leave even the brightest sparks with crossed wires.

With that in mind, we have tried to present any acronyms and industry specific terms we use on our website in a clear and understandable way below.

Looking for a specific term? Use the filters below:

An electronic control unit (ECU) is a generic term for any embedded system that controls a vehicle's electrical system or subsystem. Some modern vehicles have up to 80 ECUs which continue to increase in sophistication.

The EPA Federal Test Procedure, commonly known as FTP-75, are a series of tests defined by the US Environmental Protection Agency. It is used to measure exhaust (tailpipe) emissions and fuel economy of passenger cars. Companies which produce cars for the American market will need to test to these standards.

The NEDC was the standard drive cycle test for passenger cars in the EU. It was designed to represent the typical usage of a car in Europe when assessing the emission levels and fuel economy of engines. From 2017 it will be gradually superseded by WLTP.

The Worldwide Harmonized Light Vehicles Test Procedure (WLTP) defines a global harmonized standard for vehicle drive cycles. It determines the levels of pollutants/CO2 emissions, fuel or energy consumption as well as electric range for light-duty vehicles (passenger cars and light commercial vans). It was developed by experts from the EU, Japan, and India. Compared to the NEDC, the WLTP drive cycle runs for 50% longer with a higher average and maximum speed.

An electric drive is a system which controls the motion of an electrical machine. A typical drive contains components such as electric motors, battery packs, motor controllers and a control system which manages propulsion. Common examples include inverter drives and switched reluctance drives.

The rotor and the rotating magnetic field (RMF) of an induction machine's stator do not rotate at the same speed. This is known as slip. In motor operation, AC is applied to the stator which produces an RMF. As the rotor is made from an electrical conductor, the RMF induces an electromagnetic current in the rotor bars causing it to rotate. In generator operation, a prime mover (usually a turbine or engine) drives the rotor above the stator’s synchronous speed, causing it to generate electrical energy.

Power electronics is the application of electronics and circuitry to control power conversion from one form to another. Its study and implementation is found across the breadth and depth of the power spectrum. From microcircuits found in handheld electronics, to grid scale PV inverters.

The stator and rotor of a reluctance machine contain a different number of teeth. A reluctance motor works by energising the windings on the teeth of the stator in sequence, which creates non-permanent magnetic poles. This causes the rotor to rotate towards the teeth with the least reluctance. While reluctance motors have many applications in areas such as hybrid vehicles and domestic appliances, research into generators is still a relatively new field.

A battery management system (BMS) regulates various parameters of a battery. Common functions include monitoring cell voltage, state of change, charge/discharge current and temperature. Thus protecting the battery from operating outside its safe area and minimising risk of damage.

A capacitor is a device used to store an electric charge. They consist of one or more pairs of conductors separated by an insulator. Capacitors can accept and deliver charge very rapidly. They tolerate many more charge/discharge cycles than rechargeable batteries before deteriorating. Although capacitors are advantageous in terms of their charge/discharge rate, they are typically much heavier and larger than batteries.

Flow batteries store energy in electrolyte liquids, commonly separated by a membrane. One of their biggest advantages is that they can be almost instantly recharged by replacing the electrolyte liquid, while simultaneously recharging the existing electrolyte.

A smart grid is an integrated set of intelligent systems, which actively manage the supply and demand of an electrical grid. It may include smart meters/appliances, renewable generators and energy storage systems amongst other components. One of its main aims is to reduce peak demand and cost per kWh, whilst increasing stability and resilience.

An application GUI is software used to program hardware to replicate the real world behaviour of a power component. 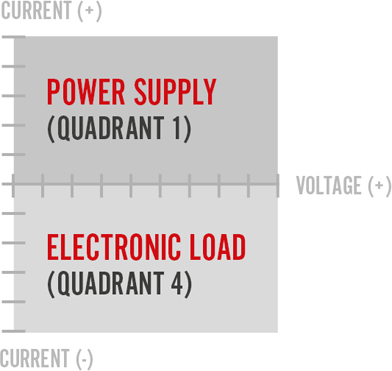 A burn-in test is where an electrical system or component is operated for an extended period of time to detect any problems.

A current shunt is a device that is used to measure electrical currents from a small voltage drop created across a resistor placed in series with a load.

DC-DC converters convert DC power from one voltage to another, typically to or from a battery. They are found in many devices, from handheld electronics to grid scale PV systems.

A four quadrant power system can operate as either an AC power supply or an AC load. 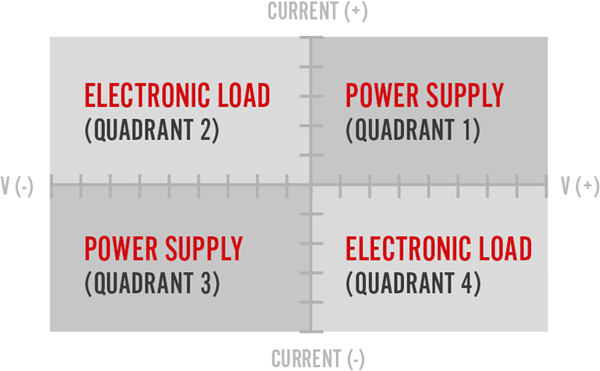 An inverter is a device which converts a DC input, typically from a battery or capacitor, to an AC output. Common examples are found in substation backups and inverter drives.

Rectifiers convert an AC input to a DC output. One of the most common rectifiers found across multiple industries are battery chargers.

Our programmable power systems can simulate virtually any power feeding or consuming condition within a test set-up, so that individual components can be optimised. A wide range of AC/DC power, voltage and current outputs are available. Both unidirectional and bidirectional models are offered as standard.

Due to their robust build, our fixed output power systems are trusted across many industries where manual control of output current and voltage isn’t required. Single phase, three phase and DC inputs are all available. Hot swappable modules are possible, as well as n+1 configurations.

We maintain a range of rental systems which provide solutions to short term, urgent or unusual test requirements. Programmable power supplies, electronic loads and bidirectional PSUs are all available. The range covers both AC and DC voltage, current and power requirements.