As part of our commitment to ensuring tomorrow’s engineers have the tools to learn today, ETPS recently donated several programmable DC power systems and DC-AC inverters to Loughborough University. 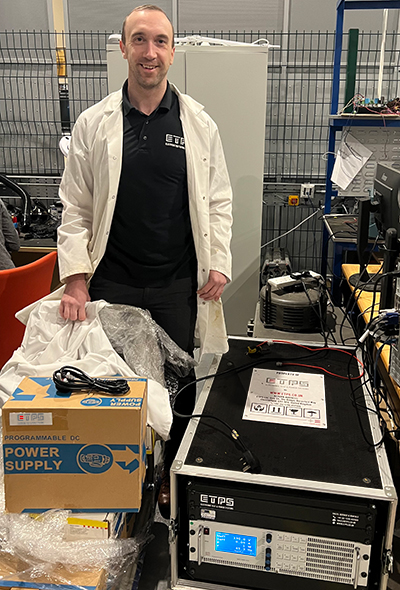 The School of Mechanical, Electrical and Manufacturing Engineering will look to utilise the DC sources for their research into battolysers. These are combined battery and electrolysers which store energy electrochemically. When overcharged the device also creates green hydrogen for longer term storage, at a cheaper cost than traditional electrolysers.

It’s hoped battolysers will help developing countries and rural communities in particular. As they are more likely to require off-grid power sources like hydrogen for backup generators and common day-to-day tasks such as cooking.

The DC-AC inverters will be used to help further the University’s research into second life batteries. This is where batteries which no longer have the capacity for their original high performance application, such as powering an electric vehicle, but still have significant capacity for other uses where the performance demands aren't as high.

Off-grid energy storage is seen as one of the main usage areas of second life batteries. The inverters will be used to convert the DC output of batteries to AC, which will then be fed to the grid in experiments.

Dani Strickland, Professor of Electrical Power Engineering, remarked that the power systems would a “be a massive help in training our next generation of smart grid engineers to decarbonise the electricity industry.”

ETPS previously provided the University with a programmable AC source to research balancing of the UK’s grid. The full case study for that project can be found here.

ETPS provide one of the most comprehensive selections of programmable DC sources on the market. Virtually any power, voltage or current requirement can be met. Adjustable power and resistance limits are offered in addition to standard CC and CV operation. Besides bench or laboratory units, our DC sources can be rackmounted or built as an ATE system controlled via a remote control interface. Modular designs are available which are easily expandable.

Our DC-AC power inverters are provided in a variety of different case styles from wall-mount and benchtop to modules, cassettes and 19" racks. Every unit provides a true sinewave output at 115VAC or 230VAC. Systems start at 125VA, with high power redundant and modular configurations possible. Ruggedised versions for ship and rail applications are available. Stand-alone units are complimented by DC-AC inverters with inbuilt bypasses.