With hopes of propelling themselves into the history books, Bloodhound LSR needed a power system to streamline their workshop testing.

The Bloodhound LSR (Land Speed Record) team will be attempting to set a new world record. Their aim is to thrust the jet and rocket powered car to speeds north of 800mph. The current record set in 1997 stands at 763.035mph.

A zero-emissions rocket fuelled by hydrogen peroxide will be used for the attempt. It's hoped that the next generation of low carbon engineers will be inspired in the process.

Impressive statistics of the vehicle include the aluminium wheels reaching 10,200 RPM at full speed. The inside of the rocket propulsion system will soar to temperatures as high as 3,000°C. 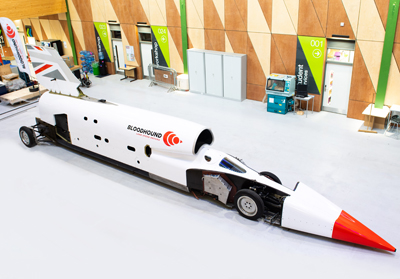 ETPS has a track record of powering the world's leading engineering projects. The team was supplied with a special 400Hz three phase AC source.

Milton Roach, Systems Technician for the Bloodhound LSR, explained "The power system allows us to test the fuel pumps in the jet tanks. Normally they'd be powered by the Eurofighter Typhoon jet itself. However this isn't practical during the workshop testing and development phase."

We don't want to have to run the engine every time we need to run the fuel pumps for whatever we're testing. So this power system allows us to do this.

The power system allows us to test the fuel pumps in the jet tanks. Normally they'd be powered by the Eurofighter Typhoon jet itself.

As part of the team's 2019 high speed testing in South Africa's Hakskeenpan, the car successfully reached over 600mph. The AC source was on hand in case any troubleshooting was required.

When asked why the power system was so important for the project, Milton added "The fuel pumps are military ones, which run off 400Hz AC rather than DC. The standard commercial three phase AC we get from the wall is 50Hz, which isn't the frequency we need."

"The AC source takes the standard three phase from the mains and converts it to the 400Hz at 200V we need. The pumps wouldn't run without doing this, so it's vital for our testing."

Circuits at 400Hz are commonly found in military and aerospace electronics. The higher frequency allows much smaller and lighter transformers, motors and power supplies to be used where space is at a premium.

When asked how easy ETPS were to work with, Milton joked "We just told them what voltage and frequency we wanted and they delivered it."

The Bloodhound Land Speed Record team is based at Berkeley, Gloucestershire. While headquartered in the UK, the team hopes to inspire the world's next generation about science, technology, engineering and mathematics. The project will also act as a supersonic testbed for showcasing emerging digital technologies.

Attempting a record at the frontiers of what is possible will require meticulous planning and precision. As there is no room for error at the speed of sound.

After setting the new world land speed record, the team will make a range of assessments before deciding whether to pursue the landmark 1,000mph (1,609km/h) speed that the car has ultimately been designed for.

The AC Source takes the standard three phase and converts it to the 400Hz at 200V we need. The pumps wouldn't run without doing it, so it's vital for our testing.

About Our Automotive Test Systems

Our systems can replace power feeding and consuming vehicle parts within a test set-up so that individual components can be optimised.

Besides new test equipment, we also keep many power systems in our rental fleet. These cover DC applications from 12V up to 1500V.

If you'd like to discuss how an ETPS system could accelerate your testing, then contact us today.

Aircraft safety is paramount in the aerospace and defence sector, which is why we develop robust electrical systems and devices that operate effectively in any condition. Read more

The programmability of our three phase AC sources allow virtually any line condition to be created. Every system features a sinewave output as standard. Other waveforms such as square, sawtooth and triangle are possible, allowing a wide variety of operating scenarios to be simulated. Real world load balancing grid processes, such as ripple control, can be superimposed onto existing waveforms. Output frequencies up to 2kHz are possible allowing aerospace power sources to be accurately recreated, which commonly operate at 400Hz and above.